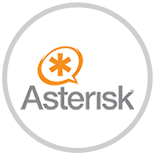 Want to Read about a Asterisk Migration We Completed? Click Here

Asterisk is a complete telecommunications platform for companies who want to incorporate an Asterisk solution in their business. It provides tested reliability of critical functions and features, tailored for small and medium sized business applications.

Asterisk is a complete telecommunications platform and represents a highly valuable piece of software for a number of reasons:

Extreme Cost Reduction
Combined with low-cost telephony hardware, Asterisk can be used to create a PBX at a fraction of the price of traditional PBX and key systems, while providing a level of functionality exceeding that of many of the most expensive systems available.

Control
Asterisk allows the user to take control of their phone system. Once a call is in a Linux® box with Asterisk, anything can be done to it. In the same way that Apache gives the user fine-grained control over virtually every aspect of its operation (and its Open Source nature gives even more flexibility), the same applies to Asterisk.

Asterisk allows PBX's and IVR applications to be rapidly created and deployed. Its powerful CLI and text configuration files allow both rapid configuration and real-time diagnostics.

Rich, Broad Feature Base
Because Asterisk is Open Source and is implemented in software, not only does it provide features such as voicemail, voice menus, IVR, and conferencing which are very expensive for proprietary systems, but it also allows new features to be added rapidly and with minimal effort.

Customization
Through its internationalization support, configuration files, and source code, every aspect of Asterisk can be tweaked. For example, Asterisk's codes for call features could be changed to match an existing system.

Dynamic Content Deployment
In the same way that web servers like Apache allow a user to deploy dynamic content, such as account information, movie show times, etc, on the web, Asterisk permits you to deploy such dynamic content over the telephone, with the same ease as CGI.

Extremely Flexible Dialplan
Asterisk's unusually flexible dialplan allows seamless integration of IVR and PBX functionality. Many of Asterisk's existing features (and desired features of the future) can be implemented using nothing more than extension logic. Asterisk supports a mix of extension lengths.

Advantages of an Asterisk over proprietary phone systems

Lower operational costs over time - In addition to taking advantage of lower cost VoIP routing, purchasing your own IP-PBX lowers costs over time.  When using hosted VoIP the initial costs are most likely lower, but monthly subscription costs are ongoing and higher over time when compared to an IP-PBX.   An business owned IP-PBX will usually result in lower averaged monthly operating costs especially for systems with a higher number of users.

Easier to configure and install than proprietary phone systems - Proprietary phone systems can be cumbersome and difficult to navigate around their software to configure and install.  An IP-PBX system will be much more familiar to computer savvy people, especially someone who has experience with  networks.  This can be especially true for Asterisk based systems that have a front-end GUI such as FreePBX.

Simpler Management - The GUI of an IP-PBX will be much more user friendly than traditional PBXs.  This allows for easier changes and additions.

Remote Extensions - employees can plug in a compatible IP- Phone at home to their Internet connection and be extension dialing.

Branch offices - can be added to an existing system and connected through an Internet connection.  (Again lower cost, with the IP-phones being the major cost of the hardware needed.)

Easy to move phones - Because phones are IP based, they are like PCs, move them from one connection to another and they find home and connect right back up to the PBX server.  No longer are the days when a simple phone move needs to have cross connects changed and a phone technician making a billable service call.

Other features of Asterisk include