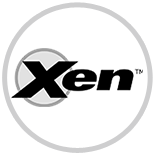 This is the prominent feature of IT in today's world as it not only decrease your hardware cost but helps you to increase your space utilization efficiency.

Here are some more benefits of Virtualization:

At Techblue Software, we work on the two most used hypervisor i.e Kvm and Xen.

Want to Read about a KVM Migration We Completed? Click Here

On the other hand XEN supports only paravirtuization only. XEN re-uses existing device drivers (both closed and open source) from Linux, making device management easy. Moreover XEN is robust to device driver failure and protects both guests and the hypervisor from faulty or malicious drivers.